“Whatever happened to the cleavage?” Asks Kathleen Baird-Murray in Desperately Seeking Cleavage in the December issue of Vogue.

Vogue observes that many high fashion labels renowned for their ample displays have this year “sent out girl after girl with legs, midriffs and cut-outs on show but no cleavage.”

Fashion editors and stylists alike are all sharing critical opinions, from saying the amount of skin being an indicator of what little power someone has to blaming social media. A stylist quoted by Vogue said of a client,

“On those occasions where her cleavage is more visible, I see what happens on her Instagram feeds afterwards, and out of 100,000 comments, 90,000 will be about her boobs. That’s not healthy, it’s creepy.”

Women’s fashion has taking many a twist and turn through the years, let alone centuries. Exposed wrists and ankles on women were once considered suggestive. Cleavage has been a relatively newer “trend” in fashion, but one that’s been in our faces dramatically and distinctly. I do believe Instagram has played a role in that. Most current models are considered supermodels simply because of their Instagram feeds and their followers. Even when friends of mine on social media post a photo in a swimsuit or revealing top, someone makes a comment or posts an emoji in negative context.

Female sexuality and objectification in general have played a part in fashion. For some companies, it would seem critical to their sales or target audience. Fashion is bigger than that and should be more about the clothes, shoes, bags, etc, than reducing women to their physical appearance. Maybe we are at a tipping point where the focus can be the fashion, and it won’t be such an obvious choice to use in ads, campaigns and runways. As mentioned before, there was an apparent lack of cleavage in fashion week, maybe designers have picked up on the disdain; believing it isn’t fashionable. It could be a dying trend, but do trends truly ever go away?

I have been happier with current runways not throwing cleavage out on their runways so heavily.  As a woman and artist, I understand the proclamation people are trying to make, like, its only cleavage, who cares anyway? All women have cleavage, and some believe it should be shown off. But in the patriarchal world we live in, its coming off as a free show and it isn’t furthering the cause of feminism or stopping the double standard effectively. Revealing cleavage isn’t getting women ahead anywhere in fashion and models should be more adamant about who they model for and what they are wearing. It has a bigger impact than they know.

However, its seems like readers have a different opinion. 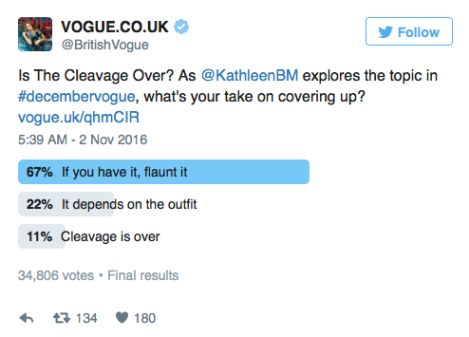 I feel like I lean somewhere between depending on the outfit and being over it from the survey. There is a lot more to women besides cleavage, and beyond that, physical appearances. I don’t think that the views on cleavage and the flaunting of it will be going anywhere soon based on this survey. Too many women unfortunately still tie feminism and empowerment to their image, hopefully that will change. There are enough designers out there who emphasize fashion, maybe with this notion, speak loudly enough to make an impact. Vogue is only the fashion bible after all.